The Owl and The Pussycat

Hello and Welcome to Magpieheaven. Once again I've neglected my blog rather, so today I decided to create a post about a little diptych I recently finished. 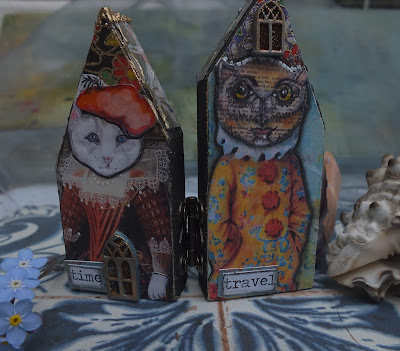 I had some little MDF house shapes going spare and I had been playing with sketching a cat - something I'd not properly attempted before! Here is my original drawing... 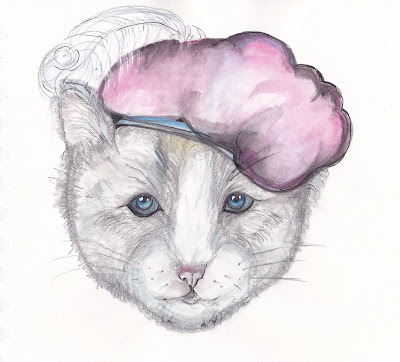 I played around with the size and shape. I knew I wanted to enhance my kitty, give him or her more character and a body and a costume! When I first draw a character I like to keep the gender fluid, giving them a costume and a identity with each new project. An Etsy customer had asked me if I ever included owls in my work and this also had inspired me to play with owl characters a while back. 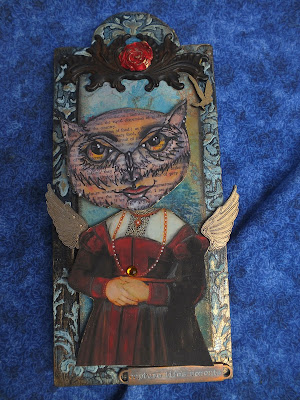 Wonderful memories of seeing owls, their wings touched by moonlight, came back to me as I researched these magnificent creatures. Owls, Pussycats - well, I just had to create an Owl and the Pussycat diptych! 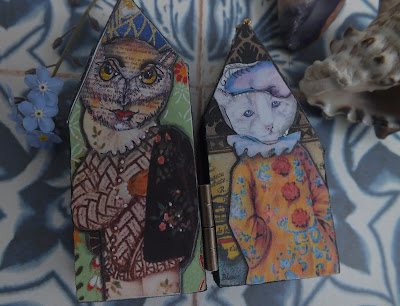 For the last 3 summers, I've participated in wonderful classes on line, run by the gifted teacher and artist Mary Jane Chadbourne. The techniques I've learned from her and the inspiration she provides have influenced my work so much. She always assures her students that the project itself will tell us exactly what it wants to look like As I worked, the Owl became a Duke - Owlsino and the Pussycat Meowlia. 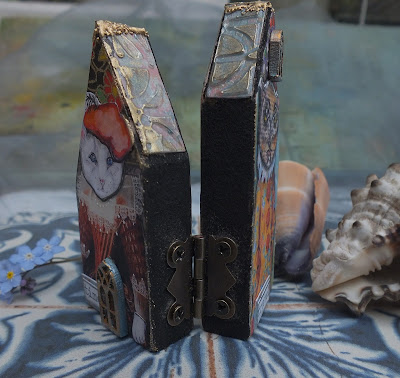 Was it in the back of my mind that my son gifted me a ticket for Twelfth Night on Mother's Day and that we'll be going to see it next week? I really don't know because it was just as if the Owl and the Pussycat told me their own story and I had very little say in the matter! 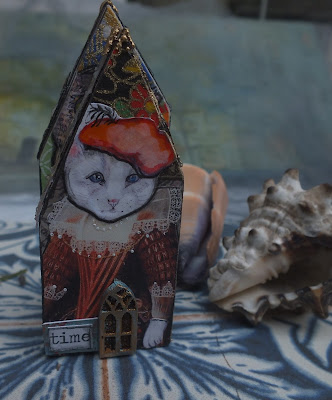 Owlsino told me how desperately in love he had been with the Lady Owlivia, from an ancient avian family. He thought he would die for love! He took on a young page who he intended to send to his 'Lady's' house with messages of love. Little did he know that the young cat he sent to plead with the indifferent Owlivia was Meowlia - a Pussycat incognito, searching for her brother who had been lost at sea. She fell hopelessly in love with him - an owl who would normally keep her well at wing's length, while his beloved Owlivia fell in love with Meowlia instead of him! The Lady Owlivia kept in her household a clown by the name of Feste, but in reality, both Owlsino  and Meowlia - and even the Lady Owlivia and her rather pompous steward, Miauwlio - were to become fools for Love - not understanding their true feelings, not seeing themselves or others for who they really were! 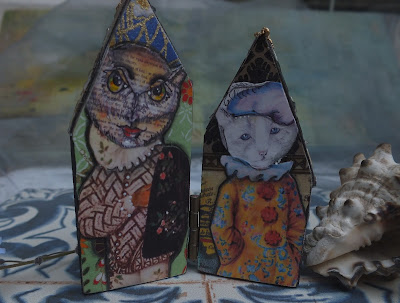 Happily, for most of the characters in Shakespeare's version of this comedy, all is resolved. And I suspect that my Owl and Pussycat too were able to work at that rather unconventional partnership, discovering eventually that Cupid's arrows don't always fall where we expect them to. Sadly, the same was not true for Edward Lear, the creator of the original Owl and Pussycat. He had an unhappy love life, falling into intense and unrequited passions. As a child I loved his nonsense verse, his tales of fantasy characters like 'Pobbles' with no toes and 'Jumblies' who sailed away in a sieve. He too travelled to distant lands, sketching flora and fauna with incredible skill. Musically gifted, amusing and imaginative, he was ashamed of his epilepsy and, although he had many social acquaintances, the romantic union enjoyed by The Owl and the Pussycat always seemed to evade him.

I hope you have enjoyed viewing my little diptych today. There is a link to my Etsy shop at the top of this blog in the right hand margin. I will be adding diptychs and pins on the theme of owls, pussycats and fantasy lands over the coming weeks, so do check out the shop if you can. Meanwhile, may all your dreams come true and may your days be filled with love and creativity.
Posted by Julie Lee at 19:00