Hello, those who've dropped by Magpie Heaven where the roses are all coming into bud, but where the Spring seems to have decided to go A.W. O. L. As a very new craft blogger in April I saw some of Carol Quance's work via the Paper Artsy Blog and I was completely blown away by her flair and her imagination. I was so inspired by her project on Sunday night at http://blog.paperartsy.co.uk/ I wanted to start playing along straight away. I was interested to hear that Carol doesn't have an exact idea of what she wants to create when she begins because I usually start playing and then see where the colours and the textures lead me too. I didn't have a little hanging like Carol so I started with a small canvas. I knew I wanted to use Lynne Perrella stamps as Carol had done; Treasure Gold and Grunge Paste, which I've just bought and love! 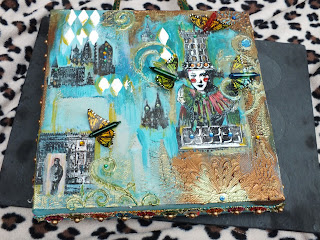 I love this lady with the clowny face and an amazing tower on her head and I mixed and matched her with some more Architecture themed Lynne Perrella stamps. 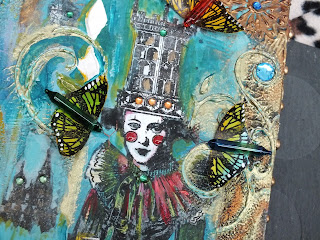 I stamped the lady onto tissue (You might not believe this, but I still have a little Crackly tissue left!) I painted her on the reverse side, using Snowflake so that her face would stand out. I put her aside and started some experimentation! 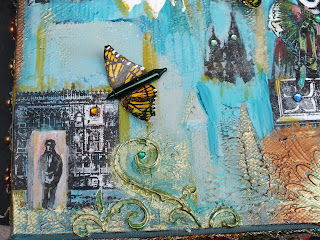 I smoothed some Grunge Paste over my canvas and stamped into it with the Lynne Perrella stamps of buildings. Now, I'm sure this works much better on a surface that you can press down on like the tags in Leandra's video and a canvas was probably not the best choice, but actually some hazy shapes of towers and roofs did appear and I liked the effect when I painted over them with South Pacific, Bora Bora and little streaks of Pumpkin Soup to highlight. Also I found that sticking stamped tissue images with Satin glaze over them worked quite well too. I then got out my stencils and played around with stenciling through them with the Grunge Paste, allowing to dry and then brushing on the Treasure Gold - very satisfying for a magpie who loves bling! What fun I had with shiny things!!! 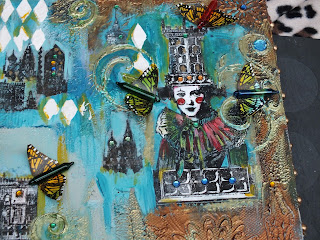 I had intended to create a city somewhere between Venice and St Petersburg all around the lady, but as I worked, the colours and images began to remind me of an icon like those I had seen in Russia when I visited about twenty-five years ago. I added tiny gems to complete this effect and some butterflies made from 'Ink and the Dog' wings with some little broken fairy lights as bodies, an idea I first played around with for The Dragons Dream TIO Challenge: Yellow, Bulb, Wire, inspired by Elizabeth R: she used old LED bulbs on a tag.  I gave my lady Blood Orange cheeks with a layer of Glossy Accents to give shine and dimension.
Carol had trimmed her hanging with beading and made a beaded string. 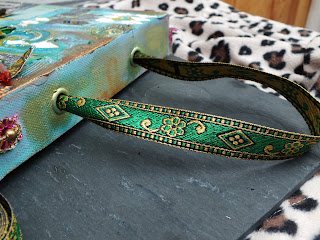 I had some beaded trim which I loved when I saw it on Dennis' haberdashery stall, but I've never been quite sure what to do with it, so I edged my canvas with it. I decided to keep my diamond Grunge Paste stencils white instead of painting the Grunge Paste, as they provided a contrast and went with the white of the lady's face. For the final touch I added some ribbon trim, again from Dennis' stall, which had a kind of icon look to it. 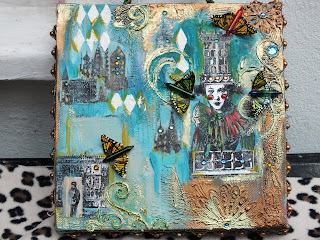 This is the most textured piece I've ever done. It was a bit difficult to capture the effect in the photos, but they are more representative of the encrusted look if you click on them. Thank you so much for dropping by today and thank you, Carol for your inspiration and your generosity in sharing it with us. Have a happy week and let's hope some of that Spring sunshine returns!
Posted by Julie Lee at 09:57