WOYWW - Guest Designing and Making my own Stamps!

I've had to write this ahead of time because Wednesday is going to be busy this week, as I've promised my hubby we can have a day out. I will try to get round to as many 'deskers' as possible, but it might take me a while. I've been thinking since I heard the news of the terrible typhoon, of our friends in the Philippines and hoping and praying that all is well with them. Love and strength to Patsy and Peggy at this time.
Wednesdays have been so special since I started blogging back in April 2013 and Mo, I think it was, told me about WOYWW I've tried not to miss it and this week it's my first time ever as a Guest Designer so I hope you won't mind me featuring what I made for the Country View Crafts Challenge. The theme is 'Letters'. You may not have time with all the Wednesday desk hopping, but if you have a moment, please look Here at Country View Crafts challenge and all the great DT inspiration from their regulars and guests! And if you're stopping by via Country View Crafts and you're wondering what WOYWW stands for, do pop over to Julia's Stamping Ground for a sneaky peek at craft desks all over the world and see why I always look forward to Wednesdays! Anyway this box is on my desk on my washing machine lid in the conservatory right now, where it's light enough to take photos! 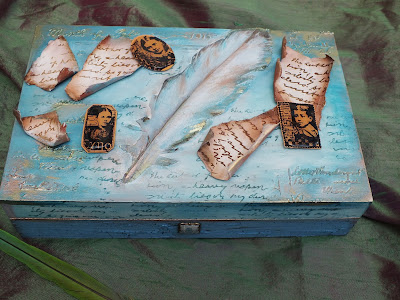 I'm already using it to store my precious letters from my friend, Kay who lives in Madrid. Most of my faraway friends email, but Kay sends me real letters! I am always so excited when they plop on my mat, full of news, humour and wisdom! The box I used was a gift from my dear friend, Dianne who also lives far, far away in Canada and who shares my magpie love of collecting and creating! We met through WOYWW. 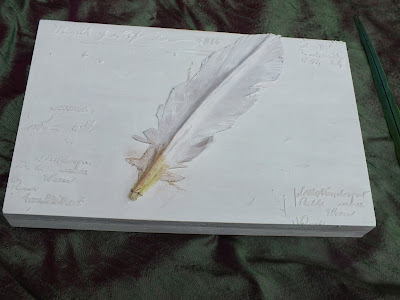 First I painted the beautiful wooden box with Fresco Finish in Snowflake. I then used Grunge Paste through a ledger stencil to create a textured, writing effect. We magpies love feathers of all kinds so I made my own quill pen shape using cardboard. I drew around a real feather for the shape, then moulded and shaped my cardboard cut-out around a central spine of cocktail sticks stuck down with Glossy Accents. I painted again with Snowflake, snipped the edges of the feather and accented it with Fresco Finish Cinnamon, some Mermaid and Rose Quartz Treasure Gold. 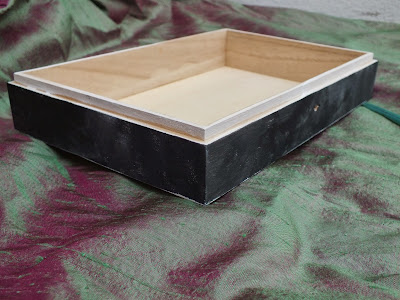 I painted the lower part of my box with Little Black Dress Fresco Finish. 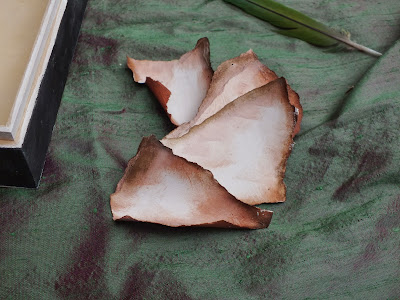 I distressed some pieces of card to look like fragments of old letters, edging them with Wendy Vecchi Potting Soil Archival ink before stamping them with a Paper Artsy script stamp from Hot Picks 1006. 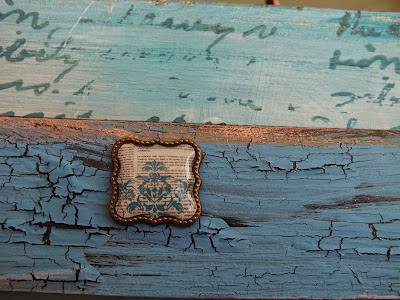 I painted my box with a combo of Lake Wanaka Fresco and Bora Bora, edged with more Rose Quartz and added a Prima brad that resembled  a tiny fragment of text. 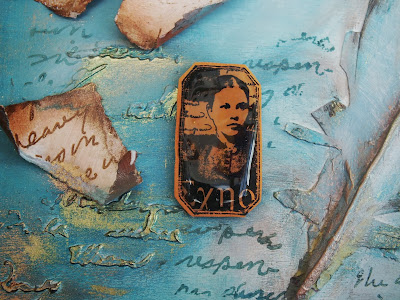 The medallions that decorate the top of my box are Paper Artsy Ink and the Dog stamps from the Petals and School Days range stamped on Cinnamon painted on Shrink Plastic and given a coating of Glossy Accents then left to dry and set overnight. I stamped with a Paper Artsy script stamp randomly over the box and also used this to create the letter fragments. I then accented some of the raised letters with Classic Treasure Gold. Thank you so much to Country View Crafts for giving me the opportunity to share what I have made and thanks to anyone who has stopped by to look.
Finally last week I told my WoYWW friends about some stamps my son found in the bureau he was sorting. It was actually my old bureau that had been moved into his room and he now needs to empty it, so we can replace it with a chair. While sorting, he found some stamps a friend of mine had asked me to design a few years ago. She had found someone online who could make up stamps to order quite cheaply, Unfortunately this lady is no longer in business so I don't have a clue where I could go if I wanted any more made. There is a whole box of my doodlings made into stamps, but I didn't have enough Ez mount, so I've only experimented with one so far and here it is- deep breath - eek, hope you like it - it's the tag on the right 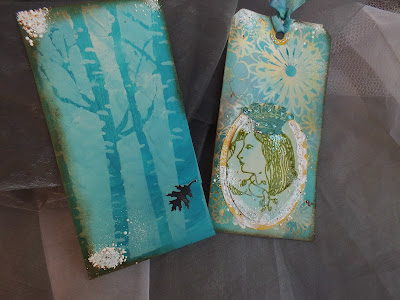 She is my Leaf Fairy Princess and I've just had a quick play with stamping her with some Wendy Vecchi Fern Green Archival, clear embossed and looking at how I might use her with other elements. I gave her a Lynne Perrella crown and lots of sparkle to make her more Christmassy, as she's really more of a spring themed princess with her hair made from leaves. The box she was in contains all her court of elves, trees with faces, a Green man and a jester just about to go off on his journey. Next time I will have some more Ez mount so I can show you what resulted from my play with these re-discovered stamps. I also have a sheet of the Green Folk that I have used as background on projects back in the spring when I sent out some WOYWW ATCs. Thank you for being so patient and looking at so much this week, including my own rather amateurish artwork! Have a great WOYWW!
Posted by Julie Lee at 05:59