I can't believe it's already the end of June and time for the Artful Reading Club hosted by the highly creative. Darcy. Please click here for more details of this opportunity to catch up on books that you had lying about and always intended to get down off the shelf, and then to create and share art inspired by them and see what other readers and artists have been discovering on their book-shelves. I had planned to read Flan O'Brien's 'At Swim Two Birds' for years and I was expecting to be impressed. Well, it's certainly a clever book, sometimes a funny one, though I'm sure I don't get half the jokes, but it's a book that makes me feel 'locked out'. Some books just draw you in: it might be from page one: you find yourself  believing in the characters and caring passionately about what happens to them. Then there are books where you feel that someone somewhere, possibly many someones are loving this and participating in a party to which you are not invited: you gaze on from the sidelines or from the street outside and you feel very lonely indeed. For me this is 'At Swim Two Birds'. It's beautifully written and it plays cleverly with the idea of the writer as puppet-master, but I found myself longing for characters that I could believe in and empathize with and - although I could admire the writer's wit, skill and imagination - not to mention his erudition - I had to really force myself to read to the end. So many people love this novel I am beginning to wonder if it's something lacking in me that I just couldn't feel totally absorbed by it. I can see its merits, but 'At Swim Two Birds' is not a novel I would wholeheartedly recommend. I wondered desperately how I was going to create anything inspired by a novel that made me feel inadequate. Then I thought about the role of the writer as puppet master and this little piece grew out of that thought. 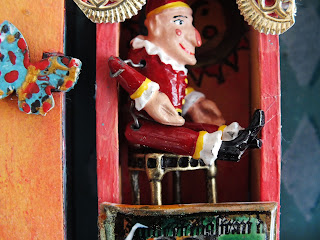 O'Brien's novel contains stories within stories; he plays with intertwined plots that sometimes dove-tail into each other and characters that rebel against authors who condemn them to act out plots over which they are supposed not to have any control. I thought about Punch and Judy on the beach when I was a child: poor Judy and the baby always doomed to be whacked by Mr P's stick and Mr Punch having to go through the same routine of whacking everyone in sight. Although it was such a violent show, I loved the colour and the miniature world of the puppets. I had a little pewter Punch, but because he had articulated limbs that made him very floppy and difficult to display, I'd never been sure what to do with him. I decided on painting this hand shrine from Retro Art Gallery with Paper Artsy Fresco paints and turning it into the hand of the writer/puppet-master and a home for my little Punch figure. This was quite a difficult piece to photograph with all the tiny details. Please click on the photos, if you would like to see it the images more clearly. 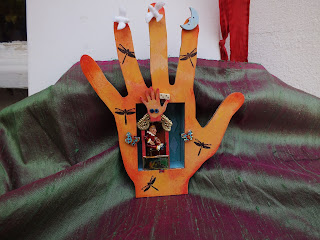 He holds Mr Punch's tiny world in the palm of his hand. The die in the tiny hand represent the power the puppet-master has over the lives of his characters, he throws the dice and their fate is set. All the tiny minis are from Retro Cafe Art Gallery. 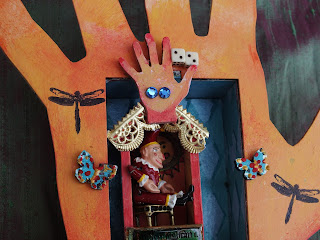 'Swim Two Birds' is a place in the novel, where Sweeney, a mad Irish king flutters from tree to tree like a bird. I have played with the idea of two in my piece: two birds, of course, but also two die each showing the number 2; two butterflies and two gems in the palm of the tiny hand. 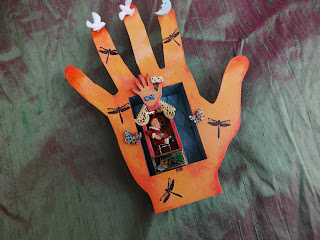 The cycle of life is represented by the moon on the hand's index finger and a little sun painted inside Mr Punch's mini-house. A Lynne Perrella stamp on shrink plastic with a Glossy Accents glaze represents Judy/female characters in Mr Punch's life. 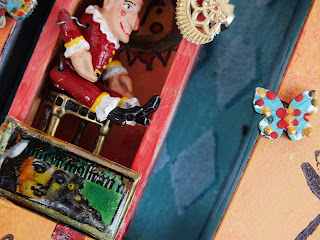 The female characters, if they can be called that, in this novel are very much sidelined - we hear a little about them, never really from them. Maybe this also affected my enjoyment of this novel. I could see the influence of James Joyce on O'Brien who often parodies Ulysses but regrettably there is no Molly Bloom in this novel! As I read on, I did come to gain pleasure from the language and the sheer quirkiness of it, but I still felt I needed more - perhaps I've come to rely too heavily on empathizing with characters and lost my fascination for the experimental!
I thoroughly enjoyed creating my puppet-master's hand, though. I can display this and remember the thoughts I had as I created it about stories, character and story-tellers. This - and the novel, I suppose - did make me think about what I go to novels for and how much power the writer/creator has over his creation. Ultimately, though, it is the reader's recognition of the world he or she creates that matters. Thank you for stopping by listening to my ramblings and looking at my art. I am now off to explore other reviews and art work, always such a pleasure!
Posted by Julie Lee at 13:42