It's the last Friday of the month, which means Darcy's Artful Reading Challenge! Please click HERE to find out about this opportunity to discuss what you've read over the month and to make art inspired by it.  I had actually intended to review another Steven Amsterdam novel this month, but although I thought his novel, 'Things We Never Saw Coming' was interesting and well written, I was not inspired to create art on its post-apocalyptic theme which, despite the humour, I found depressing. Then I saw a book my husband had left lying around. It was called 'Owning Your Own Shadow' by Robert. A. Johnson and I really did just pick it up and start reading it and then found myself drawn in!
Johnson is a Jungian psychologist, but the book is really easy to read. Basically the author explores the idea that we all have a shadow self, a personality that the world does not see to which we consign those aspects of ourselves we are not happy revealing for different reasons. At first I thought this was going to be about how we hide our bad qualities and that we should confront what we do not like about ourselves. Well, there is an aspect of this, but the author also points out that we can sometimes consign perfectly good qualities to our shadow-self like courage or nobility! He calls this the golden part of our shadow. We might be able to show these sides of ourselves to the world if we were less timid or not so worried about what others thought of us, or if it were easier for us to do so culturally and so on.
Johnson does also point out that if we do not confront our less socially acceptable emotions like anger, greed, resentment and so on, and if we go into denial about our shadow, this can also have destructive consequences. He points out that parents who have not dealt with their darker side can then project a shadow onto their children or that whole nations or social groups can project a shadow onto ethnic groups and this can result in persecution and genocide, as with the Jewish people and Hitler during WW2. What whole nations are often seeing is a projection of their own fears about themselves - fascinating! I was reminded also of the Salem witch trials, when the fears and insecurities of a deeply conservative group, clinging to the traditions of the land they left behind were projected onto members of their own community who they turned into scapegoats. This book made me think a great deal about my feelings of guilt that gnaw away sometimes and how important it is to be aware of the shadow side of one's character. Johnson encourages us not to neglect those aspects of ourselves we fear to show the world because when ignored they can be destructive. I also began to think about wholeness and to meditate on what that truly means. Around this time I found a little wooden rocking horse and rider that I bought nearly 30 years ago! This 'find' brought back memories of a very sad time in my life, but I felt a strong compulsion to alter this hand-crafted toy.  Here is the rocking horse as it was when I found it. 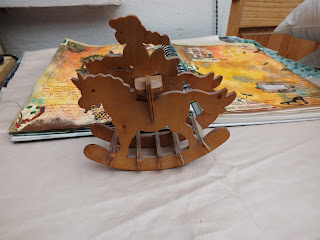 I painted it with Snowflake Fresco paint first of all and as I was doing so and thinking about how I would decorate the rocking horse I had to start dealing with a great many memories that I had  buried. I also started to think about how the toy was difficult to paint with its two sides: as the little girl rocked she had to rock in perfect harmony with her shadow self! This was a light bulb moment - this would be my art for the challenge, I decided, and it would illustrate 'Owning your Own Shadow, understanding the dark side of the psyche' by Robert. A, Johnson. 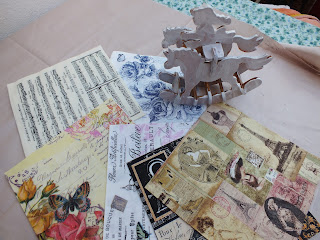 I had to apply quite a few coats of paint to my horse and rider after I sanded them down. I used warm colours of Pumpkin Soup, Smoked Paprika and a touch of  London bus on the horse and I decorated him with butterflies from some tissue napkins my crafting friend Kezzy sent me. I love butterflies and use them as often as I can. As well as being so delicate and beautiful I love their association in art with the idea of resurrection and rebirth. Johnson talks a great deal about the possibility of new beginnings if we don't neglect or deny the shadow-shelf. He tells the story of how Marie-Antoinette so wanted to feel connected to the earth that she had a beautiful milking shed built and the finest cows imported to Versaille from Switzerland. Her plan was to really learn how to be a milkmaid! However, when the moment came for her to properly get her hands all milky she found the whole activity distasteful and commanded her servants to do it! The Queen of France passed up her moment of possible re-birth, of connection with nature and the people and - of course - we all know where her continued detachment from everyday people led!!! The guillotine! 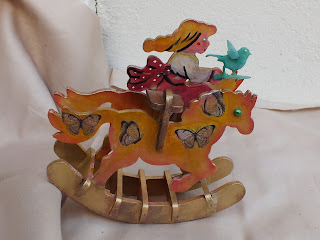 I don't know if Johnson really believed that if Marie Antoinette had milked a real cow France would not have experienced all the bloodshed and horrors it did; but - like much in this book - this anecdote focuses our thoughts on seeing life differently. I was tempted to hide my horse and rider, but by getting them out and decorating them afresh it made me think about the girl I was and try to reconcile myself with some painful past issues. Here is the girl and her horse on one side. Her dress is Fresco Blood Orange and her top Snowflake. I dotted her sash with Posca pen dots. The rockers are Treasure Gold Classic and White Fire. I used pearl beads for the girl and the horse's eyes. As I worked, it occurred to me that once I had integrated both sides of the altered toy and there was a unity, the toy could represent freedom. I die cut a little Tim Holtz bird from shrink plastic and gave to the girl to hold so that there is the sense of it about to take flight as she rides along in perfect unison with her shadow partner. We can't see the other side but the golden haired girl knows she is there. 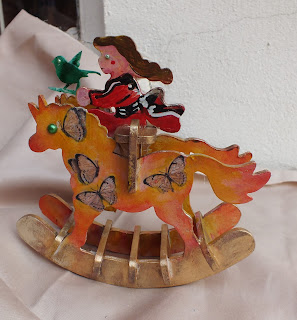 Here is the other side! I have my rocking horse on a little shelf above the dining table where I often work to remind me of the need now to attend to the shadow me so that I can fly free as a bird, unhindered by destructive emotions or deeply buried, neglected issues. Johnson says that we must constantly overhaul our shadow, as we can easily become complacent about it. This was a very short book, but - although I am not entirely convinced by Jungian psychology - I do find myself drawn to its use of story-telling and metaphors, which can often give insight into life's problems. Now I must hop over to read some other reviews of books and the art they have inspired/1
Posted by Julie Lee at 19:39